New technologies have the capacity to empower diverse learners 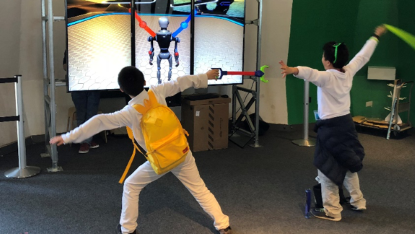 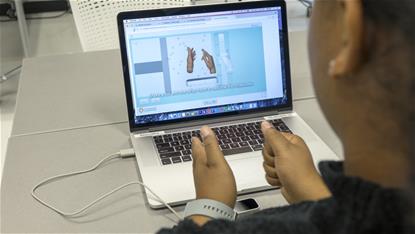 Several projects are currently active where TIER-ED faculty and students are re-designing the ways that museums engage their visitors with digital content. These include collaborations with several prominent museums across the country.

TIER-ED community members have been very successful in receiving funding from external agencies such as the National Science Foundation. Here we highlight 2 ongoing projects that have recently received NSF funding.

Oct 23, 2018, 08:56 AM by Tom Hanlon
A new initiative based in the College of Education at Illinois promises to launch the University of Illinois into the national, and even international, spotlight as it addresses critical issues in education through innovative uses of technology.

A new initiative based in the College of Education promises to launch the University of Illinois into the national, and even international, spotlight as it addresses critical issues in education through innovative uses of technology.

The educational technology tools of tomorrow are being designed today on the University of Illinois at Urbana-Champaign campus.

And those tools, says Robb Lindgren, can have a global impact.

The tools are being developed through an initiative called Technology Innovation in Educational Research and Design (TIER-ED). Lindgren, an associate professor in Curriculum & Instruction at the College of Education, is director of TIER-ED.

“TIER-ED supports new research that would effectively use the digital media platforms that are becoming available to us to solve the big pressing issues in education,” Lindgren says. “Through TIER-ED, we will be creating new tools and new designs that we can scale up and have an impact on the state first and foremost, but also nationally and internationally.”

TIER-ED brings together experts from various disciplines from within the College and across campus who work with a variety of technologies—augmented reality, virtual reality, data analytics, multitouch and other interfaces, and online learning platforms—to enhance their uses as technological tools in classrooms, museums, and other educational settings. Lindgren ticks off College of Education professors H. Chad Lane (gaming and entertainment technologies); Emma Mercier, Michael Tissenbaum, and himself (augmented and room-sized technologies); and Luc Paquette and Cynthia D’Angelo (data analytics) among the many faculty who are researching ways to better use technology in education.

“We are fortunate to have faculty members working across the spectrum, thinking about the ways the technologies we use—for example, at home or in museum environments—cultivate interest in STEM or other areas and help people to learn,” Lindgren says.

And it goes beyond simply being conversant with the latest technologies, he adds. “In the case of augmented reality and virtual reality, it’s not just getting the latest off-the-shelf technology, but thinking about how we can use data and proven design methodologies to help us better address specific educational problems through these tools.”

Older or simpler technologies can prove useful as well in the quest to design cutting-edge educational environments. “Even with simpler technologies, such as mobile phones and tablet devices, we can use data analytics and machine learning techniques to unveil better ways to configure  them and use them to personalize the learning experience for diverse learners,” Lindgren says.

When Lindgren came to campus five years ago, he immediately noticed a distinction from previous institutions where he had worked.

“It was apparent as soon as I started that it was in the DNA of this University to take on big challenges and to do so in interdisciplinary fashion, particularly in the area of new technology development,” he says. There was a focused effort to use technological innovations to solve the most pressing problems in society, and that excited him. It excites him even more now as he sees those collaborative efforts ramped up on campus, particularly empowered through TIER-ED.

Lindgren cites one of his own projects as an example of the cross-disciplinary collaboration that typifies the campus efforts in this educational technology innovation research. He is working with faculty at the National Center for Supercomputing Applications and in the Department of Computer Science to build sophisticated gesture recognition systems that involve computer vision and artificial intelligence, with the goal of helping people understand challenging science and mathematics concepts through computer simulations that allow students to interact physically with the ideas by making gestures and movements.

Large-scale interdisciplinary research is one of the core activities of TIER-ED, Lindgren says, but he emphasizes that such research is not new to Illinois. Rather, Lindgren says, “the goal is to make that research more of a coordinated effort” and use TIER-ED as infrastructure to do so. “Often, such interdisciplinary initiatives are serendipitous,” he says. “With a bit more attention to those possibilities, TIER-ED will attract people in different disciplines to collaborate. And those collaborations will happen more frequently and with more power.”

Though the funding of $900,000 from the Investment for Growth Program supports the initiative for three years, Lindgren sees TIER-ED as being sustained far beyond that. “Our proposal was based on a 10-year vision,” he says. “With the injection of new talent and new resources, we aim to generate  revenues through grants and through student tuition that can fuel the initiative well beyond 10 years.”

Lindgren and TIER-ED’s steering committee have used a portion of that funding to make new faculty hires specifically with TIER-ED in mind. After a cluster-search that resulted in 160 applicants, the College added Nathan Castillo, Cynthia D’Angelo, and Michael Tissenbaum to TIER-ED’s efforts.

“Mike is interested in new learning spaces, in how multiple surfaces and multiple components are synergistic in how they coordinate learning activities,” Lindgren says. “Cynthia is interested in simulation and game technologies as a way to facilitate engagement and interactivity with science and engineering content. She’s been using data analytics and artificial intelligence techniques to gain a better understanding of how students collaborate and work with technological tools. Nathan is interested in areas of literacy and the ways that tablets or laptops can be used in powerful ways to cultivate literate practices among diverse and underserved populations, both here in the U.S. and internationally.”

Nathan Castillo’s efforts in the area of literacy dovetail with the College’s—and the initiative’s—focus on addressing issues of equity and access for diverse learners.

“There’s generally recognition that there’s a lot of work that still needs to be done here,” Lindgren says. “We need to design educational environments that appeal to diverse learners, whether that’s learners from underrepresented populations, whether it’s making the traditionally male-centered content areas more appealing and empowering to females, whether it’s allowing people with disabilities to engage with these topics. It’s a prudent area of research. It is understanding what it means to design technologies for diverse learners.”

“The place to go for innovations”

The University of Illinois was the birthplace of PLATO, the first computer-assisted learning environment. Its reputation as a place of innovation in education and in other fields is well-established and earned. TIER-ED is cut from that same innovative mold.

“Innovating in the space of educational technology is something that Illinois is accustomed to,” Lindgren says. “But we needed a burst of momentum to keep that going into the future. This initiative will do that, and it will put the College of Education in the lead. TIER-ED will give us greater reach and greater impact in the area of technology innovations in education. 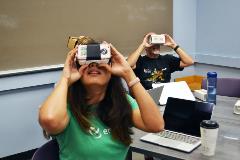 Lindgren has great hopes for TIER-ED and what it can do. “In five- or 10-years’ time, I want the natural instincts of this campus to be to turn to Education and the people who are part of the TIER-ED initiative to help solve problems where technology can provide a solution,” he says. “I want to see a fairly seamless process for brainstorming and designing for those solutions, something that’s relatively speedy and impactful to produce a real solution and potentially a design that can be carried into the real world.

“I also hope this ultimately includes having a dedicated collaboration space on this campus where people naturally gravitate toward to do this type of interdisciplinary work.”

And he has another goal, one that would sustain TIER-ED far into the future. “By the end of this year as we officially move into the second year of TIER-ED, we will begin thinking more aggressively about making TIER-ED into a center-like entity,” Lindgren says. “By that time we will have a functional infrastructure for doing large scale research and design, and we think we can gain external funding to support this work.”

"We Are Doing Bold New Things"

But what excites Lindgren the most is the opportunity to build effective and practical tools that educators can use to open up new worlds to their students.

“To put it in casual terms, what’s cool about TIER-ED is it’s giving us an opportunity to build stuff,” he says. “As a College of Education, we have produced a lot of important research. We will continue to do that, but at the same time we can also be in the forefront of creating tools that can be implemented in classrooms, that can be installed in museums. I was in the Bay Area this past summer where my team and I installed a museum exhibit that was created at Illinois and is being used by children right now on the museum floor. To be able to actually make things, to put them out in the world and see what happens, to study the impacts, the learning and social effects of doing those things, is awesome.”

TIER-ED is helping the College of Education and the University of Illinois position themselves as leaders in designing cutting-edge educational tools that allow for equitable access to impactful educational experiences.

“We’ve created a fair amount of buzz,” Lindgren says. "I was at an international conference over the summer, and a number of people came up to me and congratulated me on the hiring of the new faculty. People are noticing we are interested in doing bold new things. They’re taking notice of what’s happening on our campus.”

Looking forward to our first virtual community meeting this Thursday, September 17th. It will include having great presentations and interesting discussions!